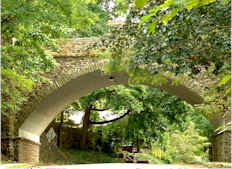 Another myth hits the dust.

"Oonuehkoi" -- is NOT the name of a local "Indian tribe" as was then claimed (see From Indian Trail to Electric Rail, page 474). In fact, it is not even a Lenape word. It is from a Massachusetts Indian dialect and means "a valley."

Somehow, our bridge-builder/bridge-namer George Lawrie plucked the word from the dialect of the "Massachusett" language that was spoken by the Natick Indians who lived around 15 miles WSW of Boston.. In their dialect, the word form is "oonoukhoi."

The bridge's only connection to a valley is a little far out: the bridge carries Mount Avenue over a cut (Grand Avenue) made in a "pass" leading down to the valley of (today's) Highway 36 which was previously known as Valley Drive. On top of the bridge, you get a view of that valley. But Lawrie never mentioned this meaning or this connection........

In years of Lenape research, I had never come across oonuehkoi as a word or as the name of a local Lenape band (except in Indian Trail to Electric Rail). Based on my disbelief of Lawrie's claim, I recently gave this word together with 108 other Native American place names currently and formerly used in Monmouth County to a group of Lenape linguists in Oklahoma.

The source of linguistic information the linguists cited to me is James Hammond Trumbull. In the 1870s-1880s he wrote about Indian language and literature in Massachusetts and Connecticut. Trumbull drew on texts from the 1660s compiled by John Eliot for Christian missionary work with the local Indians around Boston and Suffolk County. The Natick were a "praying town" in the Massachusetts Bay Colony in 1674, were assigned a reservation in Natick about 15 miles WSW of Boston, and were reportedly extinct by 1848 (according to the Smithsonian "Handbook of North American Indians," vol. 15 on The Northeast).

Powered by Zumu Software
Post it with Zumu.
www.zumu.com